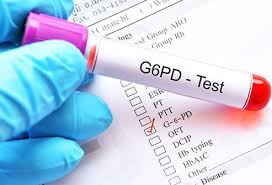 Glucose-6-Phosphate Dehydrogenase (G6PD) deficiency is the most common enzyme deficiency worldwide. This genetic disorder results in an inadequate amount of Glucose-6-phosphate dehydrogenase in the blood. G6PD is a very important enzyme that regulates various biochemical reactions in the body. It also keeps the red blood cells healthy and ensures their proper functioning and life span.

G6PD is most prevalent in Africa with the possibility of affecting up to 20% of the population. According to a report by Genetics Home Reference in 2017, there were 400million people with G6PD deficiency globally. In 2016, Lancet recorded an estimate of 33,000 deaths in 2015 that were a result of G6PD deficiency.

G6PD deficiency is genetically transferred from the X chromosomes of one or both parents. The risk factors are being male, having an African-American or Middle Eastern descent or having a family history of the deficiency.

Symptoms may not be noticed in people with G6PD deficiency. Meanwhile, if the red blood cells are exposed to stress or certain chemicals in food (e.g. fava beans), medicine (e.g. antimalarial, aspirin, sulfonamides), bacteria and viruses, some symptoms will be triggered. The symptoms include paleness, jaundice, enlarged spleen, dark urine, rapid heart rate, fever, dizziness, fatigue and shortness of breath.

Laboratory diagnoses include a G6PD blood test, Full Blood Count, Reticulocyte Count and Serum Haemoglobin test. The condition can be managed by avoiding foods and medications that trigger the symptoms, reducing stress levels and through blood transfusion.

Visit MedBioTechLab for a reliable and accurate diagnosis of G6PD deficiency.