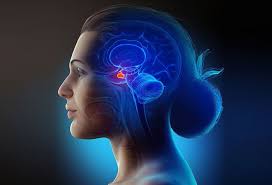 This is a hormone produced in the pituitary gland. It is also produced in the skin, adipose tissues, breasts, brains, uterus and immune cells. It is named prolactin due to the role it plays in lactation (breast growth and milk production). It also functions in promoting the reproductive system, regulating the immune system and influencing behavior.

The production of prolactin hormone is regulated by dopamine hormone, oestrogen hormone, oxytocin and thyrotropin-releasing hormone.

A high level of prolactin in the blood signifies Hyperprolactinaemia which is caused by pregnancy, prolactinomas, thyroid under-activity and medications that reduce dopamine action. Hyperprolactinaemia inhibits the production of Follicle-stimulating hormone, thereby suppressing ovulation and disturbing the menstrual cycle.

The Prolactin hormone blood test is available at MedBioTech Laboratory. Book your test today to know the state of your reproductive health.